Illustration by Adele Bea Cipste and Tobbitan Wu. Image courtesy of The Metropolitan Museum of Art.

This article is part of a temporary column in collaboration with The NYUAD Art Gallery featuring 5 Arab women artists who have exhibited their work in The Art Gallery's main space. #5WomenArtists is a worldwide campaign for art institutions to increase awareness of gender inequity in the art world and beyond.

“Wow! I’m from halfway around the world,” the multimedia artist Diana Al-Hadid remembers realizing at age seven, when a friend’s parents learned that she was from Syria. She was still new to the U.S. “I felt kind of special but I also remember feeling a little scared,” she said in an interview with The National. Although currently based in Brooklyn, New York, Al-Hadid was born in Aleppo, Syria in 1981. With a career spanning just over a decade, she has garnered significant international attention for her large-scale sculptures and installations, using materials ranging from bronze, steel and concrete to beeswax, fiberglass and foam. Her works have been described as “hauntingly beautiful” and fittingly so; their intricacy, immensity and visceral corporeality overwhelm the viewer, then linger in the mind. Dripping, dragging and defying gravity, Al-Hadid’s works are simultaneously monstrous and gorgeous. The result is art that confronts the paradoxes of being alive, of experiencing and responding to different temporalities as living bodies.

In 2016, Al-Hadid exhibited her works in a solo exhibition at the NYUAD Art Gallery. The show was titled Phantom Limb after a central work: a stacked, dripping sculpture in stasis. The towering structure consists of a female bust atop a sprawling torrent of material — mesh, plaster, metal, foil — evoking the image of a mermaid resting on the rocks or a resurrection from the sea. At the back, a detached leg is placed on a white box: the presumed “phantom limb.” Such a title offers a portal into many of the themes present in Al-Hadid’s body of work. A phantom limb describes the sensation of a missing limb still being present and able to move. Similarly, Al-Hadid’s art uses physical materiality to probe the abstract concepts of the past, present and imagined future. She manifests explorations of cultural histories by bringing into physical form the past and the memories that are inscribed into and onto both architectural and human bodies over time.

We see in “Phantom Limb” (2014), and other monumental works such as “Nothing Was Forever Is Nothing” (2019) and “And a Comet Appeared As If Frozen for The Whole Year” (2019), that even her titles are poetic prods at the passage and twisting of time. Such meditations on time and its abstractions appear vividly in the works. Al-Hadid alters hard metal materials such as bronze in order to make them appear to move effortlessly like a fluid. While the end result is a static piece of art or installation, it teems with momentum and dynamism as if caught mid-movement, ensnared for a moment, in its own journey.

In "Self Delusions” (2020), Al-Hadid explores the kaleidoscopic nature of the self by propping up a mannequin-like figure on a stool placed on a pedestal. The form is without a head and is twisted, manipulated and stretched so that it appears differently from every single angle. Further down the torso, the figure disintegrates into dripping strands that combine with the rest of the structure. The finished work is masterful in that it is both physically and metaphorically layered. Every choice executed in the artwork offers a variety of interpretations into Al-Hadid’s manifestation of self-exploration and literally, “self-delusion.” For instance, the ability to produce a different image or view from every angle suggests the complex nature of the self. One leg of the body seems divorced from the rest of the figure and turned at a different angle while the whole figure itself appears to cut open in the middle. Al-Hadid reveals very literal and visceral representations of the phantom limb here, which open up several lines of interpretation. Perhaps this self does not have a leg to stand on, feeling disembodied and disconnected from its own sense of being. Perhaps, through the placing on the pedestal, it either still idealizes or celebrates itself. Perhaps the mind and body feel at odds, and the body is at odds with itself, not fitting right and always in various stages of movement, development, change and decay. When viewed from the back, it is revealed that the back or spine of the figure is twisted away from the rest of the frame, suggesting a feeling of not knowing one’s own backbone, one’s firmness, of not having a linear, structured sense of one’s existence. The axis of the body is shifted and distorted, suggesting an inability or struggle to find grounding or to center the self. Nevertheless, all parts of the structure remain connected, alluding to an overall sense of unity despite the lack of harmonious alignment. Like a rich novel, “Self Delusions” never ceases to unfold and reveal as more time is spent looking at it.

But Al-Hadid resists the stronghold of imposing meaning; she focuses instead on material, process and the flux of time in her works. “The process of making something is a process of learning. It’s my link to the rest of the world, and everything that I get interested in is through my work and to benefit my work,” she explains. The problems that life poses are not necessarily solved or dissected down to meaning, but instead Al-Hadid shows us that they are experienced through their actual physical process, their coming into being. The timely process of welding, screwing and painting is itself part of the artwork. The long durations involved allow for the build-up of change and add to the work’s complexity. While some artworks take a few months to complete, others last several years. Al-Hadid herself finds this time to be integral to her artmaking ethos: “When people continually refer to the content and ask me what it means, it usually takes me a few years to realise what I was chasing in a work, and I rarely say this is what this means or this is what this about.”

Vamika Sinha is a contributing writer. 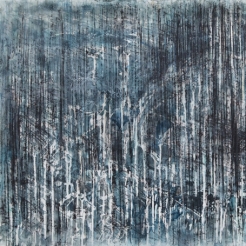