John Berggruen Gallery is pleased to present a memorial exhibition of paintings and works on paper spanning the career of the late San Francisco-based artist, Paul Wonner (1920-2008). Wonner passed away on the eve of his 88th birthday, April 23, 2008. Several of the works included in this exhibition have been in private collections and have never been on view to the public until now. There will be an opening reception held in honor of his life and work on Thursday, October 2, 2008 from 5:30-7:30pm.

Paul Wonner began his career when Abstract Expressionism was exerting a strong influence on the art world, and later participated in the Bay Area Figurative Movement with the encouragement of David Park (1911-1960), Richard Diebenkorn (1922-1993) and Elmer Nelson Bischoff (1916-1991). For much of the 1950s and 60s, Wonner pursued a painterly figurative style that included isolating figures in landscapes, studios, or domestic interiors or placing them against undefined planes of color. Wonner merged his finely honed observation skills of the world surrounding him with a straightforward depiction of the painting process to create a unique aesthetic, as is evident in River Bathers (1961), a painting on view in this exhibition.

According to art historian Caroline Jones, "the narrative richness, psychological nuances, and sheer ambiguity of [Wonner's] figurative works were unmatched by any of the first generation of Bay Area Figurative artists, with the possible exception of [Elmer] Bischoff." 1 Despite the influences of the prevailing artistic style of the day and participating in the weekly drawing sessions with his peers, he ultimately pursued a distinct path with his own work.

Moving away from brushy figuration in the late 1960s, Wonner began a new body of work, the "Imaginary Dutch Still Life" paintings, after being inspired by a routine assignment he gave to his students. These acrylic paintings are characterized by precise forms, lively composition, and an obvious reference to the seventeenth-century Vanitas masters. Wonner delighted in including tongue-and-cheek references in these paintings, along with quirky combinations of vases, flowers, fruit, books, beer bottles, and other found objects in his studio. In addition, the jewel-like palette and exaggerated tilted picture plane that he chose created a warm sense of humor, and became the core of an exhibition organized by the San Francisco Museum of Modern Art in 1981. Wonner expands on his method: "Eventually I realized that I could connect compositional elements with shadows. People thought that was strange, because the shadows were doing things that they couldn't do naturally." 2 While he seemed to be recalling the seventeenth-century with this body of work, the subtle idiosyncrasies that he included actually served to advance the genre of still-life painting. 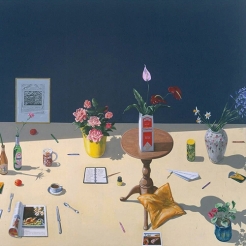