Berggruen Gallery is pleased to present Minku Kim: Straight Edge Painting, an exhibition of recent paintings by Korean artist, Minku Kim. This show marks Kim’s first solo exhibition with the gallery and will be on view May 10 through June 23, 2018. The gallery will host an opening reception on Thursday, May 10, 2018 from 5:00 to 8:00pm.

Minku Kim’s Straight Edge Paintings, or ‘S.E.P’s,’ present a unique body of work created by Kim from 2015 to present. This series emphasizes and investigates what Kim cites as the true foundations of painting: light, color, composition, and space. Intimate in scale, the minimalist works derive from a methodical and disciplined approach involving the careful layering of four to seven colors guided by precise compositional strategies and the exclusive use of linear elements.

This series occurred partially as a reaction to the artist’s highly academic and figurative education in fine art, which provided an impetus for Kim’s artistic experimentation and engagement with abstract, linear paintings devoid of curved lines or the volumetric rendering of forms. Kim simultaneously gathered inspiration from a punk movement called “Straight Edge,” a punk rock subculture which sparked his interest in creating his own set of rules for artistic creation. His works derive from a meticulous process of creation that is simultaneously methodical and impulsive. Kim’s painstaking attention to composition and proportion establishes a strong structural foundation which subsequently dictates his application of color, yet the artist does not adhere to a rigid system of painting but rather allows successive layers of paint to alter and energize the original composition. Kim writes, “My paintings operate in a minimalistic way .. I always start out step-by-step, layer-by-layer, without any preconceived notion of how the paintings will turn out. Each piece takes from a few weeks to a year or two, as I constantly modify them.”

Kim’s paintings harken back to his childhood preoccupation with Legos and his continual infatuation with architecture, while he simultaneously remains captivated with elements of the natural world including rivers, oceans, and horizon lines. These architectural and landscape motifs are embedded throughout Kim’s compositions to create a painterly sense of materiality that is simultaneously abstract and representational. His influences include Piet Mondrian, Josef Albers, Agnes Martin, and Richard Diebenkorn. While Kim’s works recall the iconic paintings of these artists, they nonetheless remain individual in their optical sense of depth and space, which evokes an emotional response grounded in the artist’s disciplined and focused contemplation and visualization of the world around him – what Kim himself describes as a “new language” for visual art. He writes, “I want (my paintings) to look easy as if anyone could paint (them). The truth is that it is not as easy as they appear. That is the beauty of it.”

Minku Kim was born in 1989 in Seoul, South Korea. He studied at the Cooper Union School of Art before attending the Maryland Institute College of Art, where he received his B.F.A. in Painting. He then studied at the New York Studio School in New York City, where he earned his M.F.A. in Sculpture. Kim has held numerous residencies, including the Drawing Marathon and Sculpture Marathon at the New York Studio School Drawing Painting & Sculpture. He earned the Painting Departmental Recognition Award (2011), the MICA Achievement Awards (2011), and the Presidential Scholarship (2012) at the Maryland Institute College of Art. Kim lives and works in Brooklyn, New York. 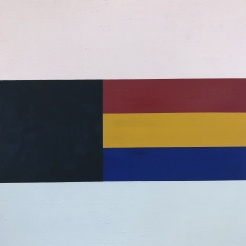