Opening Reception for the Artist: Thursday, September 6, 2007 5:30-7:30pm John Berggruen Gallery is pleased to present an exhibition of new paintings by California-based artist Michael Gregory. Yonder marks Gregory's eighth solo exhibition at the gallery and will run concurrently with Red Boat Beaches, a series of recent works by Isca Greenfield-Sanders. Yonder opens on August 30 and will continue through September 29, 2007.

Michael Gregory is best known for his highly realistic oil paintings that favor desolate barns, silos, tents, and remote rural towns as their subject matter. Although appearing to be lifted directly from real locations, the images in Gregory's paintings exist solely as fabrications produced from the artist's imagination. Alternating between the bucolic and the eerie, these works offer a unique glimpse into the mercurial temperament that patterns human imagination. The title of the exhibition, Yonder, refers not only to the distance that exists between the viewer and the viewed but also to the distance that separates the reality of genuine life from the atmospheric intangibility of the mythological American landscape as Gregory meticulously paints it. Particularly obvious in his cityscapes (although highly discernable in his rural scenes as well), is the separation between heaven and earth - visually amplified by the mirroring forces of stars in the sky and lights on the ground. The disconnect that arises between these two states is heightened by the very nature of Gregory's canvases which resemble photography in their realism but reside very much within the realm of landscape portraiture. One of Gregory's major deviations from the conventions of landscape is his utilization of the vertical canvas over the horizontal canvas. Of this choice, Gregory states, "The canvas pieces are vertical because I want to de-emphasize the landscape as a subject and draw attention to the human presence and the thin line we occupy between the convergence of heaven and earth."

Michael Gregory was born in Los Angeles in 1955. He received his BFA from the San Francisco Art Institute in 1980, and currently lives and works in the Bay Area. Aside from exhibiting on a regular basis at John Berggruen Gallery, Nancy Hoffman Gallery in New York, and Gail Severn in Idaho, Gregory's work is included in many private and public collections including the Delaware Art Museum, the Denver Art Museum, Microsoft Corporation, General Mills Corporation, Bank of America, and most recently, the San Jose Museum of Art. 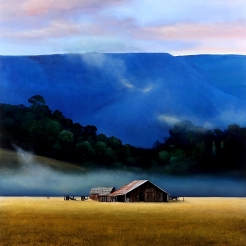