John Berggruen Gallery is pleased to present an exhibition of new paintings and works on paper by Isca Greenfield-Sanders. Somewhere Else, Somewhere Good marks Isca’s fourth solo exhibition at the gallery and will be on view October 2 – November 1, 2014. John Berggruen Gallery will host a reception for the artist on Thursday, October 2, 2014 between 5:30 and 7:30 p.m. to coincide with the San Francisco Art Dealers Association’s First Thursdays.

Nostalgia, memory, and longing for a collective ideal––themes explored in the work of Greenfield-Sanders––are perfectly embodied by this exhibition’s title as well as by its source of inspiration, the 1972 song “Perfect Day” by Lou Reed. Somewhere Else, Somewhere Good is a riff on the line “someone else, someone good” from this popular song by Reed, who was a close family friend of the artist.

Though distinguished by their subtle, meditative quality and their insistent oscillation between figuration and abstraction, the paintings unveiled in Somewhere Else, Somewhere Good must also be appreciated for their unique process of creation, one that fuses the two mediums of painting and photography.  The product of a fascination with anonymous family photos of the 1950s-1960s, Greenfield-Sanders’ body of work originates in vintage slides culled from thrift stores, flea markets, and yard sales. Once selected, Greenfield-Sanders manipulates the color palette of an image in Photoshop before printing it onto rice paper tiles; the gridded understructure of her paintings is a direct result of this process of enlargement. Greenfield-Sanders then applies various paint mediums, such as oil paint or watercolor, to the printed image thereby augmenting and highlighting certain details. One slide, shot in Wildwood, New Jersey in 1961, was the source image for twelve of the paintings in Somewhere Else, Somewhere Good, including the large oil painting, Wildwood, which depicts the full panorama captured in the original photograph. The paintings, Speedboat and Speedboat II, were created in tandem and are of the same size to illustrate how a final layer of oil paint can drastically change the original image. This technique of Greenfield-Sanders at once broaches the divide between two mediums characteristically viewed as distinct and separate from one another whilst simultaneously demonstrating how an object once relegated to obscurity can be given new life and significance.

Isca Greenfield-Sanders (b. 1978) currently lives and works in New York. She holds a dual degree in mathematics and visual arts from Brown University. In 2001, she was the Visiting Artist at the American Academy of Rome and has since had numerous solo exhibitions throughout Europe and the United States, including a solo museum exhibition in 2010 at the Museum of Contemporary Art, Denver. Greenfield-Sanders’s work has been included in a number of important collections such as The Solomon R. Guggenheim Museum, New York, NY; the Brooklyn Museum, Brooklyn, NY; The Museum of Fine Arts, Houston, TX; the USA Museum Morsbroich, Leverkusen, Germany; the McNay Art Museum, San Antonio, TX; the Israel Museum, Jerusalem, Israel; and The Estée Lauder Corporation, New York, NY. She has been the subject of articles in several publications, including Artforum, ARTnews, Artnet Magazine, Harper’s Bazaar, The New Yorker, The New York Times, and Vanity Fair. 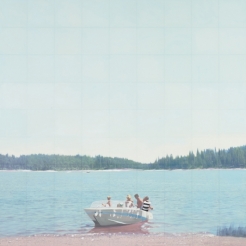