John Berggruen Gallery is pleased to present an exhibition of recent work by Frank Stella. This exhibition opens February 16, 2005, and will run through March 26, 2005.

Stella gives his new work titles such as boedjoeh, latah and ngebat. These words are Balinese, and they originate from an essay written in 1942 by Margaret Meade and Gregory Bateson entitled Balinese Character. In his new body of work, Stella continues to explore and redefine the concept of wall sculpture. This work leaps from the wall in high relief, sometimes extending nearly three feet into the viewer's space. The effect of these works is undeniably linear, with an equal emphasis on positive and negative space. The curling and twisting tubes, which are attached to the wall with stainless steel trusses, appear as drawings or sketches in space. There is a lightness and delicacy inherent in these sculptures as well as a sense of motion, as if the works will lunge from the wall at any moment. 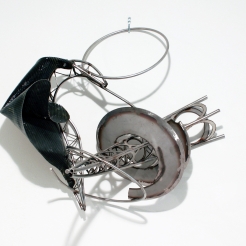