John Berggruen Gallery is pleased to present an exhibition of works on paper by Ellsworth Kelly.  This exhibition opens Thursday, July 11th and will run through Saturday, August 31st, 2002.

Born May 23, 1923 in Newburgh, New York, Ellsworth Kelly went on to study at The Pratt Institute in Brooklyn from 1941 to 1943. After military service from 1943 to 1945, he attended the School of the Museum of Fine Arts in Boston in 1946. He completed his education at  L’Ecole des Beaux-Arts in Paris.

The show features a selection of works from 1959-2000 and includes several variations of Kelly’s evolving approach to works on paper.  From his paper pulp works in the 70’s to his delicate leaf drawings of the 90’s, the show covers a broad spectrum and affords the audience a unique insight into one of America’s most important living artists.

Ellsworth Kelly has already, in his lifetime, enjoyed numerous retrospectives and one-man exhibitions in many of the world’s leading museums, including The New York Museum of Modern Art, The Whitney Museum of American Art, The Solomon R. Guggenheim Museum in New York, The Museum of Contemporary Art in Los Angeles, and The Tate Gallery in London. Aside from being featured in many important public and private collections, Ellsworth Kelly has executed many public commissions, including a mural for UNESCO in Paris, sculpture for the city of Barcelona, and a memorial for the United States Holocaust Memorial Museum in Washington, D.C. 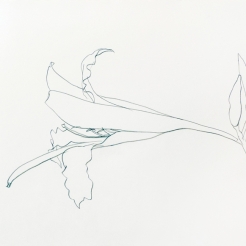