John Berggruen Gallery is pleased to present an exhibition of recent work by Christopher Brown. A Gardener’s Notebook will open Thursday, September 9th, and will run through Saturday, October 30th. A catalogue with color plates has been published to accompany the exhibition. The catalogue is available for purchase through the gallery. An opening reception will be held for the artist on September 9th, from 5:30-7:30 pm.

A Gardener’s Notebook comprises a selection of sixteen recent paintings. This exhibition includes familiar images used by the artist such as forests, cars, and birds, but also images of groups – marching bands and other collections of people – to reveal the relationship between order and chaos. Within these paintings, Brown continues to blur the line of representation and abstraction, a common theme in his work.

With many of the paintings based on photographs, film, and digital media, there is a physical yet expressive quality to this grouping of works. In some Brown explores the element of movement, while others are motivated by more narrative ideas. Each work depicts the artist’s flow of memories over time. Christopher Brown notes in his interview with Jesse Hamlin, “I think of these paintings as pages from my notebook – although I don’t really keep a notebook, per se – pages from a mental notebook. They’re part of an ongoing meditation on what painting is, and how we understand the relationships that are created in these things we make and call paintings.”

Christopher Brown was born in Camp Lejeune, North Carolina in 1951. He received his B.F.A from the University of Illinois at Urbana-Champaign in 1973 and his M.F.A at the University of California, Davis in 1976. He has held teaching positions at the University of California, Berkeley and is currently a professor of painting at the California College of the Arts. His work is represented in numerous museum collections including the San Francisco Museum of Modern Art, the Modern Art Museum of Fort Worth, and the Sheldon Memorial Art Gallery. Brown has been honored with several awards since the beginning of his career, including three National Endowment for the Arts awards. He currently lives and works in Berkeley, California. 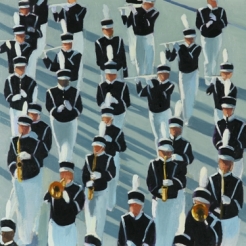