Roy Lichtenstein was born in New York City on October 27, 1923, the son of Milton and Beatrice Werner Lichtenstein. Lichtenstein studied with artist Reginald Marsh (1898-1954) at the Art Students League in 1939. After graduating from Benjamin Franklin High School in New York City, he entered Ohio State University. However, in 1943 his education was interrupted by three years of army service, during which he drew up maps for planned troop movements across Germany during World War II. Lichtenstein recieved his B.F.A from Ohio State University in 1946 and a M.F.A in 1949. He taught at Ohio State until 1951, then went to Cleveland, Ohio, to work. In 1957 he began teaching at Oswego State College in New York; in 1960 he moved to Rutgers University in New Jersey. Three years later he gave up teaching to paint full time. 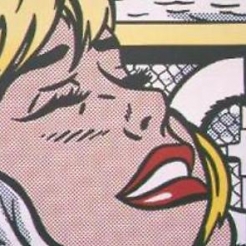