Born in 1945 in Donauschingen, Germany, at the close of World War II, Anselm Kiefer studied art informally under Joseph Beuys at the Düsseldorf Academy in the early 1970s.

Kiefer reflects upon and critiques the myths and chauvinism which eventually propelled the German Third Reich to power. His paintings depict his generation's ambivalence toward the grandiose impulse of German nationalism and its impact on history. Kiefer's work consistently balances the dual purposes of visually powerful imagery and intellectually critical analysis. Curator and art historian Mark Rosenthal has written of Germany's Spiritual Heroes, a painting where historical meaning is superimposed upon a setting of personal significance, Kiefer's former studio in a rural schoolhouse:

"The most monumental work of 1973, and the last of [an] important series, is Germany's Spiritual Heroes. On six strips of burlap sewn together, Kiefer drew perspective lines to form a deep theatrical space. The viewer is placed at the entrance of the cavernous room, slightly off center, engulfed by the wooden beams...The interior is at once a memorial hall and crematorium. Eternal fires burn along the wall as if in memory of the individuals, but the lower edge of the painting is darkened in a manner that suggests it has been singed. This highly flammable wooden room is in danger of burning, and with it Germany and its heroes will be destroyed...Kiefer's attitude about a Germany whose spiritual heroes are in fact transitory and whose deeply felt ideals are vulnerable is not only ambivalent but also sharply biting and ironical...these great figures and their achievements are reduced to just names, recorded not in a marble edifice but in the attic of a rural schoolhouse."

His work has been shown in and collected by major museums throughout the world. Recent retrospective exhibitions include the Modern Art Museum, Fort Worth (2005) (traveling to theMusée d'art contemporain de Montréal, the Hirshhorn Museum and Sculpture Garden, Washington, D.C., and SF MOMA). In 2007, the Guggenheim Museum Bilbao presented an extensive survey of recent work and Kiefer was commissioned to create a huge site-specific installation of sculptures and paintings for the inaugural "Monumenta" at the Grand Palais, Paris. In 2007, he became the first living artist to create a permanent installation at the Louvre since Georges Braque in 1953. In 2009, he directed and designed the sets for Am Anfang (In the Beginning) at the Opéra national Paris.

Kiefer lives and works in France. 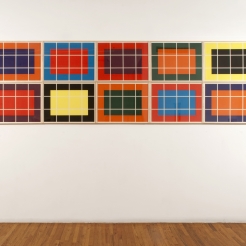 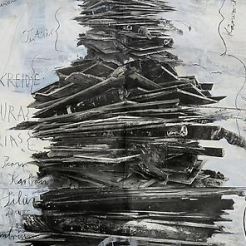